When playing the Monkey Island 2 rolling demo using ScummVM you can get some interesting details on the early stages of development of LeChuck's Revenge: Monkey Island 2. Once the game starts press the escape key and you will arrive in Woodtick with complete control over Guybrush. After that you can visit a few places that are different from the final game.

Not all rooms are accessible via the normal exploration. For those you can open the ScummVM debug console (CTRL-Alt-d) and type the room number (eg. "room 2"). You can find the number of the rooms below. The non-playable demo is available at our downloads section.

To make it easier for you, I compiled all the differences below. You can simply move the slider to compare both versions. 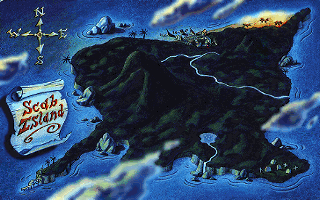 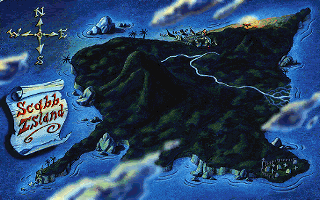 There are at least six changes: cemetery, swamp, beach, extra pond and the island was originally called "Scab Island" (only one "b").

Bart and Fink are slightly different. Most likely they were just a placeholder in the MI2 demo as there is no animation. The also stars got dimmed for the final game.

The debris on the water are smaller in the demo version. The shovel on the sign is also smaller. The stars got dimmed for the final game.

The spitton was removed in the final game. The piano was still a placeholder in the demo.

The candle on the left bottom corner was removed from the final game. There was a small key at the reception in the demo.

Different crate box for the rat and the platform on the bottom left corner is smaller in the demo. The stars also got dimmed for the final game.

In the demo there is a ladder, a fish above the door and a hanging picture (left side) that were removed from the final game. However, a few hanging peglegs were added to the final game.

Guybrush's wanted poster was improved and the Blackbeard's poster was added for the final game. 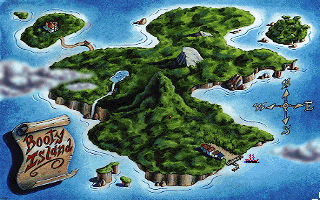 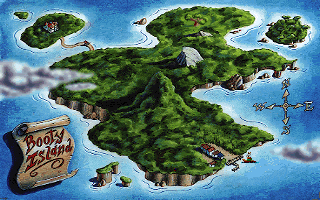 Ville de la Booty has an extra house, the big tree is missing and there is a pond in the demo. Dread's ship is also different.

Completely different room as Booty Island was originally going to be set at night. Stan’s pants changed from black to light blue and his jacket got a lighter colour in the final version.

How is it you can make it to where you can play the game? in the demo.

There's a link on the top of the article to a news item that explains how to play the MI2 demo.

There's a difference you have missed. The tree in Booty Island map is missing in the demo

I forgot about that one. Thanks!
It's on the article now.