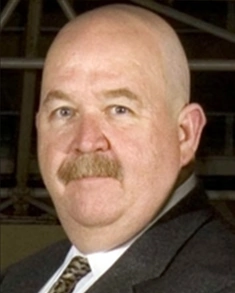 Denny Delk, you probably know him better as the voice behind the demonic and evil skull Murray in Curse of Monkey Island and Escape from Monkey Island, was so kind to answer us several questions concerning his life, his work and Monkey Island - an interview by Carla.

Hello Mr.Delk, can you tell us a bit about the man behind Murray's voice?

I've been a voice actor for quite a few years. My first game was for LucasArts when we did an Indiana Jones game. My most recent was an Electronic Arts James Bond game.

How did you start voice-acting in general? And what does it take to be / to become a voice-actor?

I started as a disc jockey, moved into commercials and games came after that.
To be a voice actor it takes a thick skin (for all the rejection), a lot of luck and the firm commitment that you will pay off your credit cards every month, in case no money comes in next month.

On your homepage (ddelk.com) one can listen to some voice-samples. I've noticed that you have a really wide range of different character voices. Were you born with that talent or did you practice hard to reach this voice?

I think I learned from my mother. She used to read bedtime stories and do all the voices. She could read the three billy goats gruff, and you'd hear all the different billy goats.

What other big voice-overs did you do?

I do cartoons, commercials, animated movies, all of it.

What is the best media to do voice-overs for? (i.e. PC Games, Commercials, Cartoons etc)

Each has its upside. Cartoons are fun because you work with several voice actors at the same time. It's great to play together. With games, each voice is recorded separately so they can encode it properly.

What was the best/worst part of voice-acting Murray the evil skull?

The best part was that the lovely Lucas folks let me play with the part. Much of the characters stuff was written, but when I went into the studio, and I started ad-libbing a little, they encouraged me to do more. Much of it wound up in the game. And what could be bad about being Murray?

Did you have certain guidelines of how to speak or is Murray as we hear him now your own invention?

Usually, when you go in to do a character, the writer has something in his head. But good writers let the talent look at the pictures and make some suggestions. Often the result is something different that the writer had in mind, but it works. The total is greater than the sum of its parts.

Can you identify with Murray? Are there parallels in your characters?

Of course I identify with Murray. Who wouldn't identify with a head that sits on a table and is frustrated because all he can do is yell?

Were there any magnificant reactions in your environment concerning your role as Murray?

The funny thing was the game designers who wanted me to record the greeting for their answering machines in Murray's voice. They cracked themselves up. And Murray was kind of an afterthought. I was told that they weren't sure if they wanted Murray to talk. And they were surprised when he became such a hit.

Have you played the Monkey Island Games yourself? (And the additional all-time-question: Which is the best part?)

I have played the game. I don't know if I can identify the best part. It is all fun.

Imagine you were sucked into the Monkey Island Game. Which character (besides Murray) would you be?

Have you ever been recognized by strangers, only by your voice?

Once or twice, but I don't walk around talking like Murray. Obviously, with lots of different voices to choose from, I can hide if I need to.

Does it annoy you to be still accosted as "The guy who voice-acted Murray" after all these years?

Not at all annoyed. It's nice that people enjoy the work. I never see my audience (I'm in the studio, remember) so I don't get applause.

Have you ever heard Murray's voice in other languages? If yes, what do you think about them?

No I haven't but I'm sure their good. I do remember hearing John Wayne's voice dubbed in French. He sounded wimpy.

Do you have a favourite Murray/Monkey Island Quote?

Not really, just his whole attitude

Are you interested in the Monkey Island Community? Have you been to any fansites?

I have been to fan sites. I really am in awe of the dedication and time that people invest in the game. I know they are really having a great time, and I'm happy I could be part of it.

Do you play Computer-games in general? Which is your favourite genre?

I do play some games, but mostly twitch games--flying X Wing fighters and the like. Shoot 'em up games. And occasionally, chess. I am the voice on ChessMaster.

How can see without eyeballs?

How did Geordy do it on Star Trek? He just senses your presence.

Ok.. you're done ;). Thanks for taking some time for our interview.

You're welcome. Have a great summer!

Denny's answer to the question whether or not he can identify with Murray is my personal favourite. :D

WELL DONE on both interviews Junior and Carla - they're great! ;)

"And occasionally, chess. I am the voice on ChessMaster."