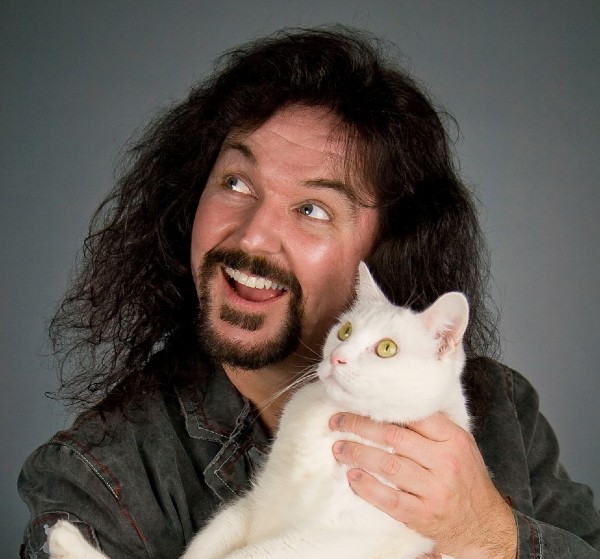 Wally Wingert is certainly what you could call a multi-talent. He is not only the voice-artist who is responsible for the voice of Escape From Monkey Island's Herman Toothrot, but he is also an actor, a singer, a performer and an all-around cool guy. Four years after Escape From Monkey Island has been released Wally Wingert had quite some problems remembering the time he worked for LucasArts. He did it though...but just read for yourselves and find out what he had to say - an interview by Junior.

Please tell us a little about yourself and in what way you are connected to Monkey Island.

I'm an actor/singer/performer/voice-over artist, and I gave Herman Toothrot his voice in "Monkey Island" which, incidentally, was a whole lot of fun!

Many people know you as the man of 999 faces. You got that reputation because you like to dress up as a certain character for special events. My favourite is how you were called by Rose McGowan to perform as Austin Powers at Marilyn Manson's 30th birthday at his house in the Hollywood Hills. Please tell us a little bit about this evening and which character was your personal favourite?

I was called by my look-alike agent, back when I was doing look-alike work, to do a birthday party for a mysterious rockstar. All the agent told me was that his girlfriend Rose set the whole thing up. Of course I put 2 and 2 together and realized it was probably Manson. It was a pretty low-key party all in all. Nothing like what I expected of Marilyn Manson. Everybody was nice and polite, and we had a great time.

My favorite live-action character to portray is my original character Uncle Davver, a creepy, un-living character I created for a TV pilot I recently produced. He has elements of several of my other characters all rolled into one. He's quite fun to do.

You're not only a voice-actor but an on-camera actor as well. Which job do you like better and why?

It's difficult to like one better than the other because they're so different. On-camera give you freedoms that voice-over doesn't (and vice versa) and there are certain benefits to both, but both are uniquely different.

Since there aren't many people familiar with the profession of voice-acting would you please describe what an ordinary day at work looks like for you?

Usually, I'll start the day with a few auditions around town. There are various casting companies in Hollywood that specialize in voice-over casting and that's where a lot of the auditions are held. Then I'll head over to a recording studio to record voice-tracks for a quick TV or radio commercial, then I have a little time to grab some lunch, before I'm due at another studio to record some voice tracks for a cartoon. Then I finish the day by recording some tracks for a narration of a TV program. After all that I'll come home and check my e-mail to see if my agent has e-mailed me anymore scripts for auditions that I can record at home. I'll record them that night and e-mail them to him so he can put them on CD and send them to the producers. I've had a lot of inquiries about a voice actor's average day, so I started putting a feature on my website called Wally's Week which details every thing I've done on a day-by-day basis in a weekly format. Check it out... (http://www.wallyontheweb.com)

What made you want to become a voice-actor and how did you get the job of speaking for the character of Herman Toothrot?

I was always fiddling around with voices, make-ups, sounds, etc. as a kid, so when I became a radio DJ at the age of 16 and started using some of the character voices in my radio shows. When I moved to LA in 1987 I looked into voice-over as a profession, as an extension of acting. I got the job as Herman through an audition for LucasArts.

When you work for a well-known company like LucasArts is there any way to bring yourself in or did you encounter certain expectations and strict guidelines which had to be followed?

Voice actors are hired through their agents, so we weren't confined by and of the usual corporate stuff. We're considered independent contractors by many definitions. But I had always been a fan of the Star Wars franchise, so it was a sincere honor to be working for LucasArts.

What was the best/worst bit about doing the voice-acting on Herman Toothrot?

I loved doing his laugh and making him really eccentric and nutty. There was nothing that I would qualify as "worst" in relation to doing Herman. I'd like to do him again, in fact.

During the time you worked for LucasArts did you notice any similarities between you and Herman Toothrot as far as character traits are concerned?

We both love to laugh!

If a tree falls in the forest, and no one is around to hear it, what color is the tree?

Are you satisfied with your work on Escape From Monkey Island's Herman Toothrot or are there a few things which bother you today when you replay certain parts of the game?

I know you'll find this hard to believe, but I don't play videogames. I'm not darn good at them.

Did you ever play non-English versions of Escape From Monkey Island? And if so, how did you like Herman's different voice-overs?

I don't even play the English versions. I guess I'm a real heel, eh?

If LucasArts wanted to hire you for Monkey Island 5 would you glady accept their offer or would consider passing on this one?

Those guys at LucasArts rock, and I would do anything they asked, anytime they asked. But they need to bring more blueberry bagels to the sessions!

Did you recieve any particular reactions from your environment for doing the voice-acting on Herman Toothrot?

Which voice-acting job you did in your entire career is the one you're most ashamed/proud of today?

I'm proud of all of them, because I believe they all have a valid place in the cosmic world of voices, on some level or other. I try not to take the jobs I would be eventually be ashamed of doing. Jobs involving promotion of gambling, alcohol consumption, drug-oriented bits, or profanity are not jobs I'll accept.

If you were stuck on an island deep within the Caribbean just like Herman, what would you do in order to keep yourself entertained?

I don't think I can mention that in this "familyk-oriented" environment.

What happens if you laugh yourself half to dead two times in a row?

You spit up your dinner.

I'm sure LucasArts gave you a copy of Escape From Monkey Island once it was finished. Did you ever beat it or aren't you that much into video games?

What projects are you currently involved in?

I provide many voices on Astro Boy on Cartoon Network, I'm narrating a series called "Amazing Medical Stories" on TLC, and I'm still the legal voice on the Hyundi radio commercials. You can keep an eye on my website (http://www.wallyontheweb.com) for all the latest info.

And finally: Do you ever grow sick of people asking you questions about a voice-over job you did such a long time ago?

No, but I do get aggravated that my memory isn't what it used to be, and sometimes it's hard to remember all those things. Darn old age, anyway!

Alright, thanks a lot again for answering my questions, Mr. Wingert. Is there anything left you would like to tell the members of the Monkey Island community?

You're very welcome. Yes, in the words of REO Speedwagon, "Live every moment, love every day. Before you know it your precious time slips away." Oh yeah, and say your prayers and brush your teeth.

In addition to answering my questions Wally Wingert also recorded the below audio in which he greets the regular visitors of MILegend.com (now LegendOfMI.com).

I love your question, Jr though I didn't always get the answer I was looking forward to.