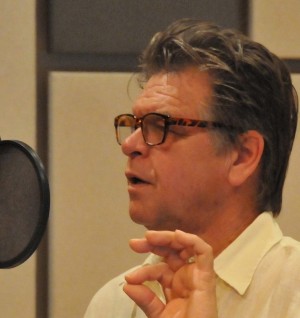 Patrick Fraley is the man behind the voice of Escape From Monkey Island's Stan the salesman. Being involved in many projects he's one of the most active voice-actors you'll find these days. He did, however, find the time to answer a few questions I asked him about his job and his life - an interview by Junior.

Hello Mr.Fraley, many of our visitors will know you as the man who did the voice of Stan the salesman in Escape From Monkey Island. Please tell us a little bit more about yourself.

I've been doing voices for cartoons and commercials and teaching others how to do it for about thirty years.

At which point of your life did you decide that you wanted to be a professional voice-actor? Please describe how you finally became one.

I didn't decide to be a voice actor. It was the kind of job that casting people and producers kept hiring me for. From the git-go I wanted to be a performer. At four years old, I was thinking about being a clown. Now I merely dream of shooting them. I did drama in High School, then went 6 years in college studying acting. I started my career in Australia, and that's where I bumped into the wonderful world of voice over.

Can you tell us a little bit about the projects you're currently working on?

Tomorrow, I rehearse a couple of short stories by Guy De Maupassant which I will read for an audiobook. The next day, I'm providing voices for a feature length animated & live action movie about race horses, and then I'll guest on a Nickelodeon Show, "Chalk Zone".

What is the best/worst bit about being a voice-actor?

There is no worst part to doing voice acting. The best part is that I can meet my family's needs in a unique creative way, working with some of the most talented performers on the planet.

Do you think you have to be a humourous person to a certain degree if you want to become successful at voice-acting?

I think a performer needs to understand humor, to 'get it', but does not necessarily have to, "be funny".

You do not only voice video-game characters but are involved in several movie projects, too. You did some additional voices in Monsters, Inc., for instance. What was that like and which do you prefer: Doing the voices of video-game or movie characters?

I prefer movies and TV only because a performer usually works alone for video-games. The only exception that comes to mine was the recording of the characters for the Planet Moon (LucasArts released it) game, "Armed and Dangerous". The four of us were in the booth together, and it was just great!

I've read that of all the shows you've supplied voices for, you think Wildcat is your favourite. What was so special about this show and what made this job unique?

It was special to me because of how it got it. Disney had been auditioning a whole lot of actors-Lorenzo Music, Peter Cummins, Etc,--the best in the industry. Ginny McSwain was casting and would go on to direct the show. They were asking for a dumb read. My take on it was childish, and naive. It worked, and I got the part. It was unique as the writing was of such high quality, which, at that time, was rare as there were so many animated shows being produced.

You have been a voice-actor for quite a while now. I think your first job ever was for the TV series The Jetsons in 1962. Throughout your whole career which voice-over job is the one you're most proud/ashamed of?

I caught the tail end of The Jetsons in the early '80's. I did my first voice job in 1974 in Australia where I went to begin my career. I did a really bad impression of Jimmy Cagney on a radio commercial. I am most proud of my recent recording of 'The Adventures of Huckleberry Finn' for an audiobook. 100 characters and Mark Twain's genius words to work with.

As far as being ashamed, I have avoided that aspect by turning down jobs and auditions that I felt were too rude. It was difficult at times, but it's nice to be in a position to answer your question with a clear conscience.

Who's the person you're most happy you met during your career and why?

I would have to include a short list of great talents such as Tex Avery, Lilly Tomlin, and Jonathan Winters. Moreover, I'd have to say that I've been blessed to work with many of the greatest talents in the entertainment industry.

The Monkey Island games were not the only LucasArts games you've worked on. You did the voices of several characters from Star Wars Rogue Squadron III: Rebel Strike and Armed & Dangerous as well, for example. Is there anything special about working for LucasArts? Do you have any particular associations when you think back today?

Working for LucasArts means I get to work with director and my friend Darragh O'Farrell. Darragh and I met while I was doing the character Denver in Denver the Last Dinosaur years ago. He was 19 and fresh from Ireland. Now he's way up there in LucasArts, and a terrific director and friend.

When you work for LucasArts or any other company do you have the freedom to create the voice you want your character to have on your own or is there a strict schedule?

The process usually begins with me being given a description of the character and some text. I take that and give a choice. Then, I audition again, and have the benefit of direction, which usually adjusts my choice. There is less ad-libbing or improvisation in CD-ROM that in other voice over jobs, but I would say LucasArts allows more freedom than others.

You might not know it, but Stan, the character you did the voice-acting on, is still one of the most popular Monkey Island characters among the fan community. Does this make you proud or aren't you interested in your former jobs at all?

We all enjoy and need encouragement. That's probably the first reason I was drawn to performing. A fundamental motivation for acting is to delight the audience. I'm always grateful when I hear-tell that my work, the characters I created are appealing.

Stan the salesman was one of several characters from the first two Monkey Island games who had not yet been voiced but who made appearances in Curse of Monkey Island and Escape From Monkey Island. Do you think it's more challenging to do the voice-acting on an already existing character in general considering that people already have certain expectations towards what the voice should sound like?

I wasn't aware of that, but this comes up with doing an audiobook and creating a voice for a character that people have already "heard" in their heads. Not much you can do, but focus on realizing the author's intent. By the way, doing a reoccurring character is great. The writers usually are hip to the character and work up stuff that includes some of the aspects of the character which the performer brought to the table. Also, it allows the performer to further develop the character.

The character of Stan might be a little crazy and weird at times but all in all he is certainly one of Monkey Island's good guys. What is more fun to do: The heroes or the villains?

Villains are more fun. I did the evil bodiless Krang on the Teenage Mutant Ninja Turtle series (80's-90's) and got away with murder. There's usually more room to move with them.

The Monkey Island games belong to the most popular video-game series of all times. There's a huge number of fan web-sites on the internet and an even larger number of fans visit them on a regular basis. Can you understand how some people devote so much time to something like that?

Oh sure! I've spent many an hour gaming, and I have four teenage boys. It's so much more than TV. I totally get gaming.

Do you enjoy video-games yourself? Did you ever play a Monkey Island game?

I don't think I played Monkey Island, but I can guarantee you I'm going to slip it in and check it out. I realize that I should do that with every game I do. You just get busy and let some things slid. As a gamer, I was stuck into Dark Forces big-time, and FA/18. I'm too busy these days except for my gameboy TETRIS, which I play way too much.

If you would be a salesman like Stan and if you had to sell previous owned stuff for a living, what do you think you would sell?

Cars. I owned a 1950 Buick for years, and my dad sold Fords, in the 50's and 60's. I probably used my memories of salesman to create part of the role of Stan. Hanging out with the salesmen that worked with my dad gave me a lot of fuel for characters.

Why are carrots more orange than oranges?

Carrots try harder. They spend their life stuck in the dirt hanging around with worms. And they're pissed off because oranges got the swingin' name and so they are totally into showing up the fruits.

One last question: Do you know whether or not you'll be doing any more voice-acting for LucasArts in the future?

I'm always hopeful. My job is to try to be excellent. I get hired because I deliver what producers want and need. It's one of the primary ways I can worship God who gave me what talent I have.

Alright, that's about it. Thank you very much for making this interview possible, Mr.Fraley. Any final words of wisdom you would like to share with the Monkey Island fan community?

Enjoy the game, and let it inspire you to find of way of creating. Don't be satisfied with viewing. Create something that begs to be viewed!